Alison Light is a full-time writer. She is the author of four books of non-fiction to date and numerous other publications; she is a regular contributor to the London Review of Books and has written for the Guardian, the New Statesman, and the Times Literary Supplement among others.  She writes and broadcasts chiefly on issues to do with British cultural life, literature and history. She is a Fellow of the British Academy and of the Royal Society of Literature.

She was born in Portsmouth, UK and took a degree in English at Churchill College, Cambridge University. She then worked as a school teacher, as a studio manager at the BBC, and taught part-time in adult education. She gained a doctorate from Sussex University and has lectured, often part-time, in English at a number of institutions including Brighton Polytechnic, Royal Holloway College, and Newcastle University.

As the widow of the socialist historian, Raphael Samuel, who died in 1996, she spent several years helping to establish the Raphael Samuel History Centre and Archive: both are now flourishing in London. Her latest book, A Radical Romance, is a memoir of their marriage. 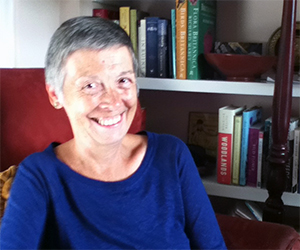 The PEN Ackerley Prize is the only prize in the UK for memoir and autobiography.
Find out more and listen to Alison reading from the book

Peter Parker, the chairman of the judges of the 2020 PEN Ackerley prize said:

'A Radical Romance is not only an extremely frank account of a love affair and marriage between two people who came to left-wing politics through very different routes, and were instrumental in rethinking the way in which we view and record history. It also provides a vivid and funny picture of a less than comfortable life in a tumble-down Georgian house in Spitalfields while all around them developers had begun swallowing up the area. Finally, Light weaves into her narrative a fascinating enquiry into both memory and the memoir form. All these elements combined to make this thoughtful, moving and beautifully written book our unanimous choice as this year’s winner.'

A Radical Romance: A Memoir of Love, Grief and Consolation, published by Fig Tree/Penguin. Available at www.penguin.co.uk

From the reviews so far:

Alison is co-editor of The Feminist Library, a new series for Edinburgh University Press, of essays in recent literary and cultural criticism. Her own volume, Inside History, is out in November.

Alison's review in The Guardian of Madeleine Bunting’s book, Labours of Love: The Crisis of Care, about care, paid and unpaid, in today's society:


Alison writes about the Croydon Poltergeist...

Listen to Alison discuss with Matthew Sweet and others on BBC Radio 3 'The Strange Case of the Country House Pile' - why are we so obsessed with country houses?

Light gives our thoughts space to breathe alongside her own.
Intelligent Life Magazine, Economist

Her instincts continue to be those of the dissenter.
London Review of Books